What was once a water trough for horses stands on Fountain Circle between the entrances to Bradley Hall and the Community Center.  It was carved from a block of sand stone and served horses on the Cornwall estate. Today it is a decorative planter maintained during warmer months by Cornwall Manor resident volunteers.

In 1894 Margaret Coleman Freeman Buckingham, Cornwall Manor’s benefactress, married Navy Lieutenant Commander Benjamin Horr Buckingham.  He was born in Ohio in 1869, the son of a Presbyterian minister. In 1869 Buckingham graduated from the U.S. Naval Academy and rose through the ranks.

He served as Naval Attache in London, Paris, Berlin, and Saint Petersburg. For three years he commanded the USS Dolphin at the service of Grover Cleveland’s Secretary of the navy. He retired from the Navy in 1898 due to ill health.  After retirement he served on the board of the Cornwall Iron Co.,  as president of the Cornwall Railroad Co., and vice president of Lackawanna Iron and Steel. He died in 1906 at Currituck Inlet, North Carolina, while on a hunting and fishing trip, only 12 years after his marriage to Margaret. 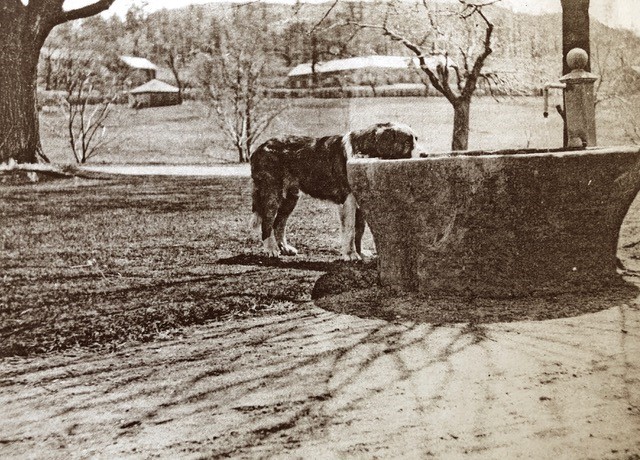 Buckingham was an avid hunter and fisherman who raised BIG dogs.  This photograph shows one of his dogs using that sandstone horse trough as a water dish – – with all four feet firmly on the ground!