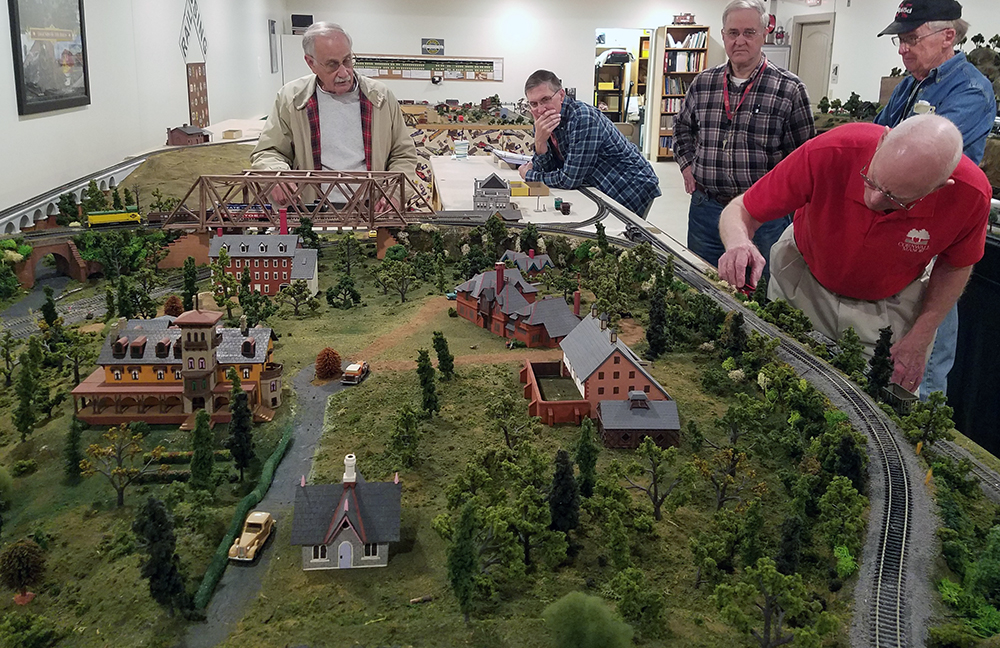 Who would have “thunk” in early 2015 when a small group of Cornwall Manor residents, with little more in common than age and a love of railroading, convened in someone’s home to talk about starting a model railroad club?  No facilities, no layout, no plans, no officers, no money, no official inventory….just a shared dream. But, a seed was planted. That first year was highlighted by discussion (some might call it idle clatter …I mean chatter) – mission statement drafts, organization structures, by-laws, layout themes, space requirements, finances. Obviously, the will was there; but, sadly, no trains left the station. In fact, there was no station and there were no trains. Now, in 2020, we are five years old; and the trains are going all over the place. Derailing? Sometimes. But, by and large, we are on track.

Entering 2016, under the leadership of our first president, Glenn Fisher, CMRRC’s structure and objectives materialized, and we promoted ourselves to Cornwall Manor Administration as a serious and viable special interest group worthy of recognition and support. Concurrently, Cornwall Manor management crystallized its plans for the renovation of Freeman Hall along with other ancillary improvement projects, including a makeover of the infamous Mule Barn. We were asked if the railroad club would be interested in taking up residence in half of that building (with the Woodshop moving into the other half)?” WOULD WE? Absolutely! At last a home – both large enough to accommodate our ideas, and adapted electrically to support model railroading needs.

December 2016, venturing into the public domain for the first time and sharing in Cornwall Manor’s Christmas spirit, the club displayed a mini model train layout in the Freeman Community Center’s Fireside Room (now the Marketing Welcome Center). Residents and visitors alike were delighted to learn of our existence, asked numerous questions, and, yes, just stood there and watched our little train go around and around and….

2017 was a year of planning and anticipation. Although the club’s primary focus was on HO gauge modelling, it was agreed during this time to allocate some space in the Mule Barn to an “O” gauge layout consisting of the “marriage” of two personal layouts brought to Cornwall Manor by members Gerry Boltz and Dave Orledge and donated to the club. Also, in the spirit of community support, a can recycling program was initiated to raise money for  Cornwall Manor’s Benevolent Care Fund.

2018 was a momentous year. In February, Lee Stickler, then Cornwall Manor’s Vice President for Finance, informed club leaders that the Board of Trustees had officially recognized CMRRC as an authorized auxiliary organization of Cornwall Manor. Then, on April 30, standing in an empty but fully-renovated north wing of the Mule Barn, Paul Weidman, Cornwall Manor’s Vice President for Plant Operations, presented the keys to CMRRC’s  new home to our second  President, Rick Borger. Just three months later the “O” gauge layout was complete and operating. Further, a fledging “HO” gauge layout emerged, featuring railroad and buildings found in the Cornwall geographic area and on Cornwall Manor’s main campus. Both layouts were enjoyed by visitors at our first two open houses held in December.

Focus on the “HO” layout punctuated 2019, as it grew in both size and scenic attractiveness. Members contributed their skills in many disciplines (structural, track laying, electrical, scenery, etc.), and learned new ones while working alongside their mentors. As word of both our existence and our enthusiasm spread, community interest grew as well. Two visits by residents from the Health Center and two more open houses were an important part of a fun-filled and productive year.

Fortunately, as this update goes to press, the Coronavirus pandemic has not derailed CMRRC; but it has caused us to push the “pause” button on physical development of our HO layout.  Although we have temporarily switched to slower tracks, the ideas are still swirling throughout our membership. We are revisiting our strategic objectives to assure that we are headed in the right direction. One thing we know for sure – there is a lot of “fun” work ahead of us, with many rewards along the way as our dreams become reality.

In coming months – and years – we look forward to sharing a bit of the model railroading world with you. Better yet, why not consider joining our ranks? We are not a large group, and would welcome both your ideas and your help. You may ride along in the caboose … lay some track …  “plant” a tree … build a barn … help make old engine #9 chug on down the line … or just relax in the observation car.  All are enjoyable and rewarding. So, watch for notices of more open houses to be scheduled as we emerge from the throes of the current health crisis. Find a club member, ask your questions, consider joining us at one of our monthly meetings. We would love to greet and share our doings with you. In the meantime….. TOOT, TOOT and ALL ABOARD!!!