In the spring of 1950, the Golden Cross Society (known today as the Cornwall Manor Society) began six months after the establishment of The Methodist Church Home in Cornwall. The Rev. Dr. Levi Zerr, Founder and Director of the Home, approached Mrs. Mildred Barnes, Conference President of the Women’s Society of Christian Service, to discuss the feasibility of organizing a society to support the Home, both financially and spiritually. Mrs. Barnes and a core group of women contacted as many churches and individuals as possible and invited them to a meeting on October 7, 1950 at the Home. From this meeting, the Golden Cross Society of the Methodist Church
Home in Cornwall was born.

Continuing strong 70 years later, the Cornwall Manor Society has over 430 members and has remained true Cornwall Manor Society Celebrates 70 Years to their mission of raising funds to fulfill an annual benevolent care pledge to Cornwall Manor, which provides assistance for residents with limited or depleted financial resources; offers social and educational activities for Personal Care and Health Center residents and purchases special needs and wish list items for Personal Care and the Health Center.

In order to fulfill their mission, the Society operates several shoppes and holds multiple fundraisers. The Gift Shop, whose origins stem from card tables set up in the Mansion, was formally organized in 1953. Known today as the “Manor Shoppe,” it opened in its current space in the Freeman Community Center in 1984 and continues to provide cards, candy, decorative items, jewelry, gifts and a convenience store.

The Curiosity Shoppe was the former boutique located in the Wellness Center which featured new-to-you clothing and household items. Campus Collectibles, a thrift store offering furniture, small household appliances, books and many more treasures, was located on the first floor of Laurel Place. The two stores merged into the “Treasure Trove” and moved to a new and larger location in May 2018.

The Crafters are busy year-round making seasonal crafts and decorative items that are sold at Society general meetings, the annual Blooms & More Festival and the Cookies, Carols, Crafts & More holiday event. Many of the Crafters are also involved in the Sew4U group, which mends, alters and fixes clothing items belonging to personal care and health center residents free of charge.

The Society’s best-known and longest-running fundraiser is the annual festival, which began as bazaars. The first informal bazaar was held on the porch of the Mansion in October 1950. Bazaars were held twice a year until 1987 when only the October bazaar known as the “Fall Festival” was held. In 2012, the annual fall event switched to a spring “Blooms & More” event. The annual festival continues to feature an open house to allow visitors to tour grounds and buildings and has many of the same  eatures as the bazaars like baked goods, candy, craft items, a plant sale, silent auction and much more.

The Love Gift, which ran as an annual giving campaign from 1972-1989, is another Society special project. In honor of the Society’s 60th Anniversary in 2010, the Love Gift was reinstated to help support their pledge of $60,000 to sponsor a covered porch at the new health center. The generosity of many individuals enabled the Society to exceed their pledge by an additional $30,000 for the new health center.

Many Society projects established decades ago still continue today. Birthday and Christmas cards and gifts were given by local churches and in 1953 monthly birthday parties were established. Local churches host a birthday party each month including fellowship, a gift and of course – birthday cake! A gift cart, “Shoppe on Wheels,” was created in 1981 and has twice-weekly service rounds offering snacks, candy, cards and sundries in the Health Center. The Star Project organizes an annual gift drive to ensure every Personal Care and Health Center resident receives a gift on Christmas morning. Horizons Unlimited is a memory stimulation program offered to personal care and health center residents. Volunteers select a topic (like classic cars) and a kit including information, photos, fun facts, memorabilia on the topic is used by the volunteers to present the subject to residents. The purpose is to stimulate memories and encourage conversation among residents. Health Center Greeters greet family members and visitors at the health center and Transporters transport residents within the Health Center to beauty appointments, s 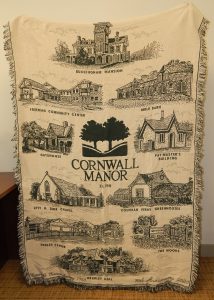 Last year, the Society exceeded their annual pledge to Cornwall Manor to support benevolent care by $12,000. They also contributed $30,000 towards the Corson Personal Care expansion and renovation project and will continue raising funds. Even though the pandemic has halted many plans and events for 2020, the Society is still commemorating their 70th anniversary with the sale of a custom throw (shown at right). First introduced in 1996 and recreated for 2020 due to popular demand, the afghan measures 48” x 68” and features ten Cornwall Manor buildings and landmarks. The blanket can be purchased in the Manor Shoppe for $48 (includes sales tax).

Cornwall Manor is both honored and blessed to have an auxiliary that works very hard to provide programs for personal care and health center residents and raise funds to support Cornwall Manor. The Society has given close to $3 million to Cornwall Manor during their existence.